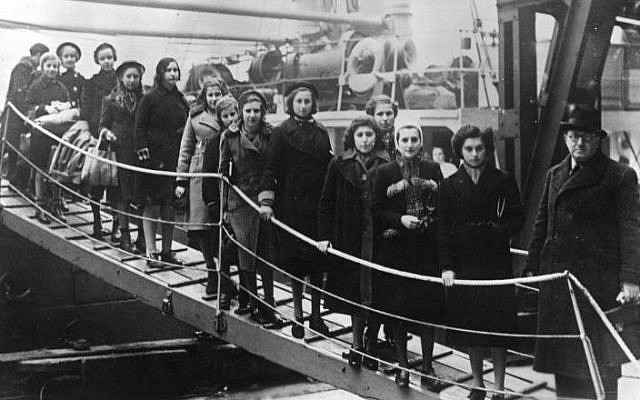 Jewish children boarding ship as part of a kindertransport out of Nazi occupied Europe. (Courtesy of Pamela Sturhoofd)

My granddaughter is just 6 years old. Full of life, she is great fun to be with and brightens my days. You would never guess that she is a refugee.

My grandfather was born in a small village in Russia, its name lost in the mists of time. The village was somewhere in the Pale of Settlement, a region of Imperial Russia that existed from 1791 to 1917 in which Jews could live and beyond which they could not.

His family name was Kleinfeld, probably because in his Yiddish-speaking community his family owned a “small field.” Sometime towards the end of 1917, caught between pogroms and the threat of forced enlistment in the tzar’s army, my grandfather, a 14-year-old boy at the time, left his family and somehow made his way to England – a stateless refugee.

As we now know from the United Nations Relief and Works Agency for Palestine Refugees (UNRWA), refugee status passes from generation to generation. My father, and myself, were both born in Britain but, as my grandfather was never able to return to Russia and reclaim his small field, we undoubtably met UNRWA’s requirements for refugee status.

My son and his young daughter would like to return to their inherited small field, but have been unable to do so; both Russia and the Pale of Settlement have ceased to exist. They must continue to live as refugees in Israel, where they both were born.

As it happened, the United Nations was not there to receive my grandfather when he landed in England; it hadn’t been invented. With no help from anyone, he found work in a local market, and made a life for himself. He learned a new, strange language, English, to replace his native Russian and Yiddish. He married and brought up three sons and lived a long and successful life. He hardly ever thought about his small field and would have been astonished to know that the United Nations considered him and his descendants to be refugees.

My other grandfather was only 3 years old when he was brought to England, very much a refugee from Polish anti-Semitism. He also grew up to enjoy a happy and successful life, unaware that his refugee status was passing from him to my mother and again to me, grandson to refugees on both sides of my family.

And now we come to the group of people calling themselves “Palestinians.” Just to fill in the background, “Palestine” started as a Roman province, Syria Palaestina, the merging of Roman Syria and Roman Judaea, following the crushing of the Bar Kokhba revolt in 135 CE. The inhabitants of this Palestine were, of course, the Jews.

During the British Mandate, “Palestinian” referred to all residing there, regardless of religion or ethnicity. However, during World War II, when the British Army created the Palestine Regiment, only Jews joined, the local Arabs saying – we’re Arabs not Palestinians. After the 1948 establishment of Israel, the term Palestinian Jew fell out of favor. The English-language newspaper The Palestine Post, founded by Jews, changed its name to The Jerusalem Post.

It is not clear when the idea of an Arab Palestinian national identity first surfaced but many historians put it in the early decades of the 20th century. Where did these new Palestinians come from? In the pre-state years, the “Palestinians” came from outside the borders of Mandate Palestine, from Egypt, Syria, Lebanon, and Jordan. Most were attracted by jobs in industry and agriculture as the Zionist enterprise started to take off. As usual, you could say “it was the Jews’ fault.”

In the 1948 War of Independence, many Arabs ignored Jewish pleas to stay and left to join their brother Arabs in the countries they had come from, Egypt, Syria, Lebanon, and Jordan. Their leaders told them that newly formed Israel would be defeated in a matter of days and they would be able to return to a Jew-free Palestine. It didn’t work out quite as they had hoped!

Their brother Arabs turned out to be less than welcoming and the fleeing refugees found themselves in “temporary” camps set up by the newly formed UNRWA. At first, “Palestine refugees” referred to both Arabs and Jews who had lived in Mandatory Palestine, but had been displaced in the 1948 War of Independence. By 1950, UNRWA had changed the definition to include only persons residing in UNRWA’s areas of operation in the Palestinian territories, Lebanon, Jordan and Syria – no Jews need apply. The number of refugees who met UNRWA’s Palestine Refugee criteria was 711,000.

And what did these refugees do? Did they build new lives? Did they find work? Did they seek self-respect and independence? Did they learn new skills, new languages? No, they just kept having children. By 2017, the original 711,00 refugees had increased to five million.
And what did the host countries do for their brother Arabs. Did they help them join their societies? Did they award them citizenship? No, they put barbed wire around them and kept them in “refugee camps” for the past 70 years.

And what did UNRWA do? Did its US-funded budget go towards helping the refugees make successful new lives? No, it created generation after generation of dependent “aid addicts,” and a huge army of highly paid workers and managers living comfortable lives.

Now President Trump has had enough. The time has come to stop these endless payments to third, fourth generation “refugees.” Time for the host countries to fully accept the refugees. Time to move on.

It is time to understand that Exodus 20:6 is not speaking about Palestinian refugees: “But I am loyal and gracious to the thousandth generation of those who love me and keep my commandments.”