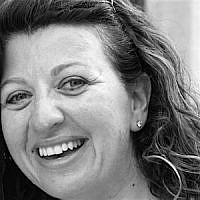 The decision was made. We were making Aliyah. We had hummed and haa-ed for 20 years, should we, shouldn’t we? (We’re not the quickest decision makers). After extensive internet research and googling ‘Reasons to make Aliyah’, it boiled down to the following pros and cons;

But the weather in the UK was getting worse, (something to do with global warming), so we decided to go.

We heard that a town called Ra’anana was the best place to be if you had zero Hebrew knowledge, so we decided to live there. I hadn’t paid much attention at Cheder 35 years ago, and although our kids had attended Jewish schools, their Hebrew was limited to singing Anim Zemirot and reciting the Shema. If we were going to have any chance of a successful Aliyah, we thought it best not to mix with any Israelis at all for the first ten years, and stick with the Anglos.

Husband and I knew Aliyah was the right decision, but explaining to a 16 year old girl, and 14 and 11 year old boys, why we were moving to a country where we didn’t actually know anyone and where they spoke a foreign language was – tricky. Teenage Daughter immediately declared she ‘wasn’t coming’. She was moving in with her best friend, her life was ‘ruined’, and she was ‘never speaking to us again’.

Middle Son was 100% on board. His one condition was he didn’t want to go to school ever again and wanted to spend his days surfing. He was 14 at the time, so attending school was a bit of an issue, but it appeared to be a deal breaker. It was at this point I made the best parental decision I could. I lied. It was the only way to get him on the plane. I assured him that of course he didn’t have to go to school ever again, not a problem. And I bought him a surf board.

Youngest Son was really looking forward to it, as long as all his friends could come too.

Packing day was fun. Teenage Daughter lay sobbing and clinging onto her mattress as it was physically dragged out of the house. We had sadly turned down her request to live with best friend, (turned out best friends parents weren’t totally on board). She continued with her lamentations – ‘worst parents in the world’, ‘life was ruined’, ‘never speaking to us again’ – and the sobbing turned to wailing as she watched her stuff get packed into the Big Metal Box transporting our belongings across the sea. I politely enquired with the removal company whether Teenage Daughter could travel in Big Metal Box instead of flying with us, but apparently human beings weren’t allowed, due to some insurance problem or something.

We had four weeks until Departure Day living in a completely empty house. There was no TV (a major problem for me – see above – proper TV addict), nor was there any crockery or cooking utensils (not a major problem for me, cooking has never been my thing). So we passed the time discussing where Youngest Son’s friends were going to live (apparently they were all sleeping in his room), and watching Middle Son practice his newly discovered surfing skills down the stairs.

D Day arrived. We made it to the airport in spite of having to manoeuvre 15 suitcases and three kids. Teenage Daughter was still wailing – ‘life ruined, worst parents, never speaking to us again…’, – so once we were on the plane and the ‘fasten seat belt’ sign had been turned off, we locked her in the toilet.

Old Blighty disappeared behind the horizon, and I had a moment of sudden panic that this was a one way flight. How was I getting home? It took a moment before I realised I wasn’t actually going home, well not to the place I had called home for over 40 years. I was going to a new home.

I drifted off into a blissful reverie of sun, sea, sand, hummous and falafel………until I was rudely awakened by the El Al air hostess roughly prodding my arm.

“Yes, yes, children, what? Did I forget them?’ (Had Big Metal Box people changed their mind and taken Teenage Daughter with them?)

‘Sorry to bother you, just a few things…could you remove your daughter from the toilet? Other passengers are waiting. Also, your son seems to think it’s OK to use the plane aisle for surfing. And get your youngest out the cockpit. He’s telling the pilot to go back. Apparently we left his friends behind.’

Hmmmm. Aliyah was going to be fun.