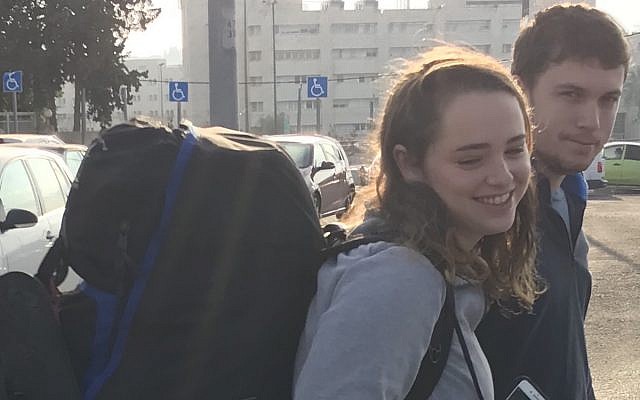 My youngest daughter Zoe became a soldier in the Israeli army today. From the dizzying number of options available for her service, she chose to sign up for the new “Bardelas” (Cheetah) platoon – a mixed male/female infantry unit tasked with patrolling the borders. This was the third time that Robyn and I made the trip to Ammunition Hill in Jerusalem to accompany one of our daughters entering the military stage in her life.

A long time has transpired since I served in the army. Though I may wax enthusiastic about Zoe being a “second generation”’ fighter in the Nahal brigade, I am well aware that the military reality she encounters is very different from that which greeted me when I moved to Israel. And I would like to think that for the most part, the IDF has become a better place, especially for young women.

Coincidentally, today hundreds of thousands of Israelis, from all political persuasions and ethnic groups, participated in demonstrations, protesting the ongoing domestic violence against women. The phenomenon seems to me to be a symptom. If we want to think about root causes, at least part of the pathology of chauvinism facing women in Israel — from unequal pay to ubiquitous sexual harassment and violence — has its origins in our military culture.

For most of Israel’s history, the army relegated young women, in the best of cases, to being social workers, teachers and psychometric testers – more often to secretaries and coffee makers. There was an implicit message about the subservient role they needed to play and male soldiers (and veterans) quickly internalized the associated “entitlement.” But this really has started to change.

Part of the good news has to do with the increasing role that army intelligence plays in military strategy. More soldiers serve in intelligence by far than any other part of the IDF. In these units, past gender restrictions make no sense at all. My other two daughters’ military careers as intelligence officers suggests that these experiences are uniquely challenging for an 18-year-old and ultimately edifying, in the confidence and leadership skills instilled.

The real revolution, however, can be found in the sea-change taking place out in the field. Ever since Alice Miller sued the air force for disqualifying her from the pilots course in 1994, combat units increasingly allow women to step up to the plate and become full players in the core mission of the IDF: defending the country. This is extremely important as it eliminates much of the built in asymmetry in the roles assumed at this critical stage in Israeli life after high school. It also opens up the ranks of our operational combat units to the other half of the nation’s talented youth, that had previously been disqualified. A recent study by the Israel Democracy Institute reports that 75% of the Israeli public supports the expanded portfolio of military opportunities for women.

And so I thought to myself at today’s demonstration at the university where I teach, that protesting 24 heinous murders of women in 2018 is surely important. But strengthening the Israeli army’s empowering of women is probably even more so.

Zoe’s decision to pass up sundry opportunities in intelligence and opt for six months of infantry training and then over a year of patrolling the borders of the southlands strikes me as particularly patriotic. It will surely push her out of her comfort zone into a somewhat more dangerous line of work. But it also sends a message: Israel’s girls are ready and willing to do their part for the country’s defense. We just need to open the doors.

This will require ongoing vigilance. An internal Knesset study leaked this week reported that over 7,000 Ultra-Orthodox soldiers presently serve in the IDF, a record 3,000 drafted this year alone. This is wonderful news — a trend which should contribute to greater national unity and improved economic and professional prospects for the Haredi community.

But it also poses a challenge to the army, given the constant pressure from religious male soldiers (or often just their rabbis) to limit the role of women in the military to avoid any excessively alluring exposure. Giving in to such demands is a slippery slope, which can have pernicious consequences across society – from separate seating for women in the back of buses to segregated college programs. It is critical that expanded Haredi and female combat participation continue in parallel – and that women not pay a price for the increasing integration of religious men into the “people’s army”.

During my military service, from time to time I was faced with unpleasant conditions: lying in an ambush on freezing cold ground or dragging around ridiculously heavy packs for dozens of kilometers. To generate motivation I would often consider my great grandfather – Yaakov Koller. I never met him. Neither did my mother. He was shot by the Nazis during the invasion of Poland in 1939, apparently too infirm to follow their orders. Having a great-grandson in a Jewish army would have been unthinkable to him given the reality of his time. So I often reminded myself that our new national circumstances were nothing short of miraculous. Participation in the Zionist makeover was a statement: if we all did our part, it was possible to prevent this kind of collective helplessness from ever happening again.

My great-grandfather was part of the last generation to live in the ultra-Orthodox Polish shtetl. So I can also assume that having a great-great granddaughter proficient in a range of self-defense and military skills would have been even more unimaginable to him. I believe that both of these “unimaginable” transformations constitute collective progress.

Often, we see the only problems of modern Israel: the corruption, extremism, aggression and greed poisoning our society. We lose sight of the fact that many things here really have gotten better. It makes me feel a whole lot better about sending Zoe off this morning to defend our country — this maddening and inspiring work in progress. How lucky we are to have patriotic, brilliant, young people like Zoe to keep us safe so that we can enjoy life in the homeland and continue the work to make it a better place.