The Blogs
Alden Solovy
Blessings Abound
Apply for a Blog
Please note that the posts on The Blogs are contributed by third parties. The opinions, facts and any media content in them are presented solely by the authors, and neither The Times of Israel nor its partners assume any responsibility for them. Please contact us in case of abuse. In case of abuse,
Report this post.

The Kotel plaza was eerily subdued and empty today. The men’s section, not quite as full as past months, emptied out quickly. The women’s section was wide open. The Women of the Wall — 48 who came out in spite of the ongoing terror threat in order to pray and celebrate two Bat Mitzvahs — made up the largest group present.

There were many, many cops, significantly more police than usual, both regular police and Border Police. This morning, the Kotel plaza might just have been the safest spot in all of Israel.

Almost no one bothered to pay attention to the women or the group of male supporters. As if by silent collusion, most of the people seemed to say that we have other worries these days, like the ease with which a kitchen knife or a car can be used as a weapon of terror.

When the women began to pray and sing, one of the regular hecklers began shouting from the men’s side his usual rant about sacrilege and desecration, desecration of the Kotel, the Torah and the word of G-d.

Then something extraordinary happened. One of the young yeshiva men — men at the Kotel to sing and dance and pray for the new month — turned to the heckler and said something like this: “Not today. Don’t shout hateful things today. I won’t put up with it.” 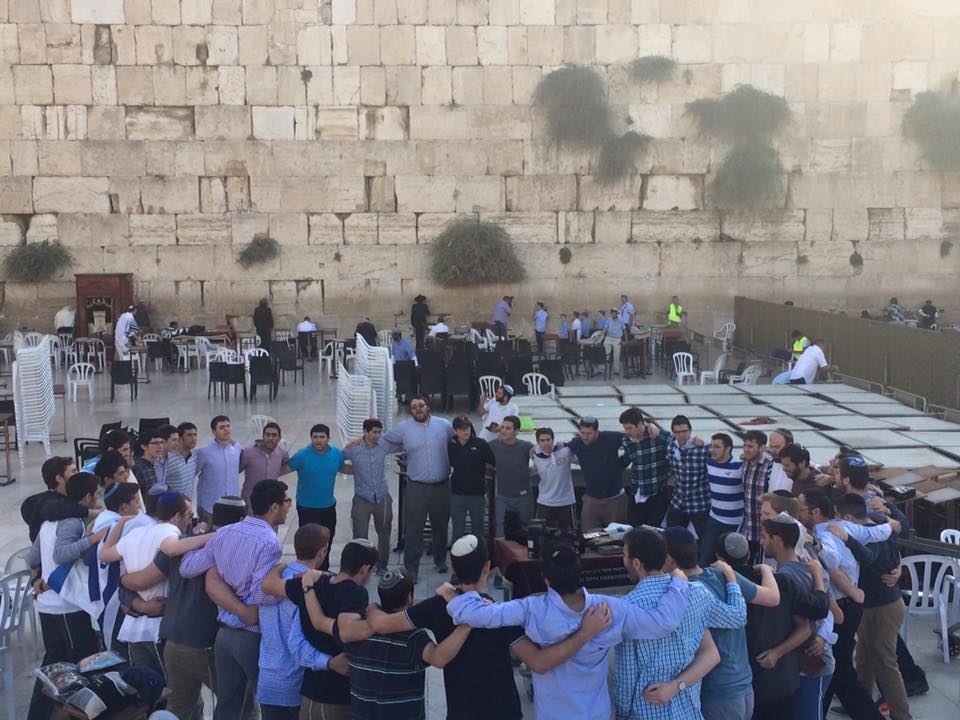 One of these young men shut down a rant against the Women of the Wall today by rejecting verbal violence against other Jews. Photo by Charlie Kalech

To that young man, thank you. You’re an antidote to the physical and verbal violence that regularly gets hurled at the Women of the Wall and the group’s supporters. To me, personally, you are an antidote to the man who stomped on my stomach, the one who threw Charlie Kalech to the ground and those who roughed up other men for helping women achieve their right to read from a Sefer Torah at the Kotel. Your act of chesed is a tikkun for me. Don’t forget this brave stance when times are more peaceful. Don’t ever tolerate hatred of Jew against Jew.

To that young man, please come next month and do it again. And again and again. It should not take a week of violence and murder for us to understand that we are brothers and sisters, Jews whose love for G-d and service bring us together to the Kotel to pray.

Most of us managed to pray and show respect for one another. Yes, several female hecklers could be seen from across the plaza speaking nastily at the Women of the Wall. Even that did not seem to have the kind of vehemence we’ve seen in past months.

The leadership of WOW helped create this ‘live and let live’ tone earlier in the week by declaring publicly that the group would make no attempt to bring a Torah into the Kotel plaza. The police have other worries these days, said WOW chair Anat Hoffman in her letter to Rabbi Shmuel Rabinovitch. Rabinovitch administers the Kotel Plaza. In that letter, she also asked if WOW could borrow a Sefer Torah from the 100 Torahs at the Kotel reserved only for men. His answer: Silence. 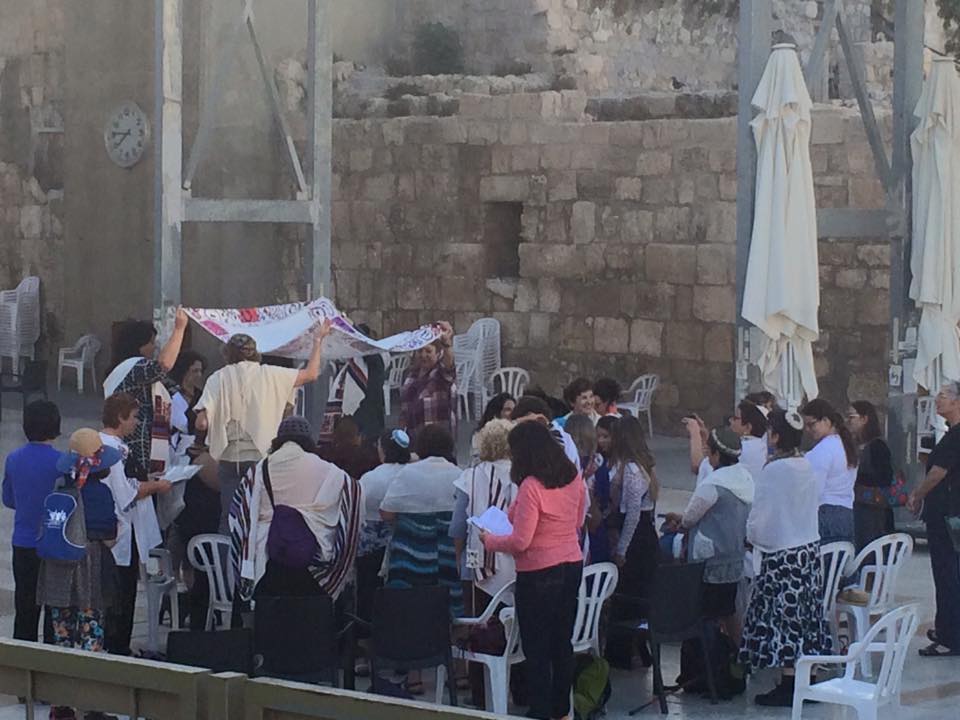 Bat Mitzvah at the Kotel with Women of the Wall. Photo by Charlie Kalech

It all went relatively well, except the women did not have a Torah. It went well in large part because WOW gave up — for one month — fighting the system for its protected right to read from a Sefer Torah. It was the right decision, for now, knowing full well that this concession would be neither acknowledged nor understood by the power that runs the Kotel plaza nor WOW’s detractors.

Today’s small moment: One man telling another, “Don’t shout hateful things today.” May it become a revolution. Don’t think hateful thoughts today. May it become our only way. Don’t diminish the value of any of our prayers. We need them all.

One more thing. Rabbi Rabinovitch, you still owe Anat and the Women of the Wall an answer. Silence is not acceptable from someone paid with a publicly-funded salary. You are accountable to all of us.

In the name of unity, here’s my prayer called “Israel: A Meditation.”

Israel: A Meditation
Israel,
You are my people.
You are my heart and you are my hope.
We waited together at the mountain
When G-d revealed the Holy Word.
We wandered together through the desert
On the path to sacred soil.
We watched the sea part.
We heard the heavens roar.
We stood at the doorway to freedom,
At the border of a Promised Land.

Israel,
You are my destiny.
You are my joy and you are my truth.
We were victorious at Jericho,
Unyielding at Masada.
We defied empires
For Torah.
We defied kings
For justice and freedom.
We’ve traveled the earth,
Wandered the millennia,
Refugees of the ages,
Homeless and hopeful,
Waiting to return
To native ground.

“Israel: A Meditation” is © 2010 Alden Solovy and tobendlight.com. All rights reserved. 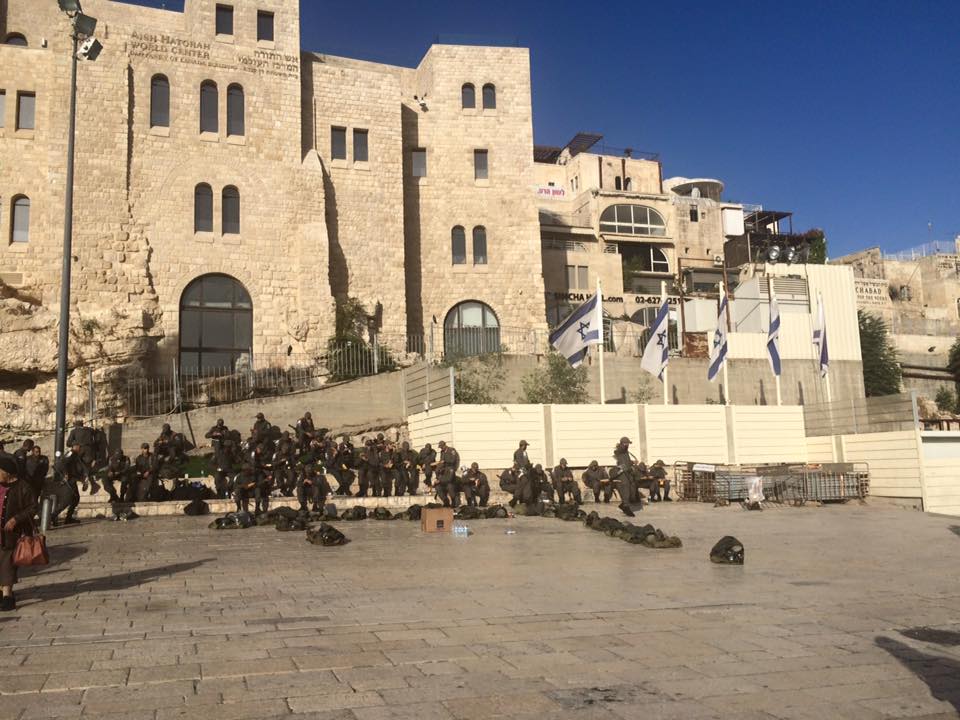 Thank you to Charlie Kalech for his contributions to this article.

About the Author
Alden Solovy is the Liturgist-in-Residence at the Pardes Institute of Jewish Studies in Jerusalem. A liturgist, poet, and educator, his teaching spans from Jerusalem to the UK to synagogues throughout North America. He's the author of five books of modern t'fillot, having written hundreds of pieces of new liturgy. His latest book, "This Precious Life: Encountering the Divine with Poetry and Prayer," released this year, is the final installment in his 'Grateful, Joyous, Precious' trilogy. His work is anthologized in more than 15 volumes of prayers and meditations. Alden made aliyah in 2012. Read his work at www.ToBendLight.com.
Related Topics
Related Posts
Comments
Advertisement