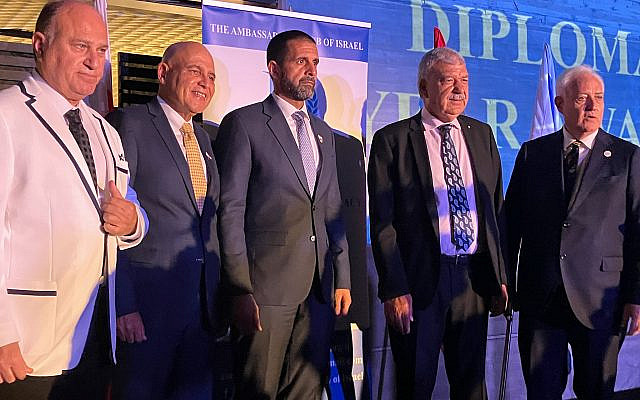 HERZLIYYA — In a scene that would have been completely unimaginable only three years ago, two Arab ambassadors were honored in this Tel Aviv suburb Thursday night for their countries’ budding friendships with the Jewish state of Israel.

Bahraini Ambassador Khaled Yousef Al Jalahma and his Moroccan counterpart, Ambassador Abderrahim Beyyoudh, both received plaques designating each as “Diplomat of the Year” during the Ambassadors’ Club of Israel’s annual awards ceremony.

Also honored was Israeli businessman Yoram Naor, honorary consul-general of the Central American nation of Belize, as well as David Fattal, CEO of Fattal Hotel Group, which owns and operates more than 200 hotel properties in 19 countries.

Some 120 people—including more than a dozen ambassadors representing countries from El Salvador to Nepal—attended the Sept. 21 event at Herzliyya’s TEO Cultural Center, which also coincided with International Peace Day.

“This year’s gala is particularly meaningful as we mark the second anniversary of the Abraham Accords,” said the club’s founder and president, Yitzhak Eldan, who like nearly a million fellow Israelis is of Moroccan origin. “How fitting that our dear friends from Bahrain and Morocco are being recognized as ambassadors of the year.” 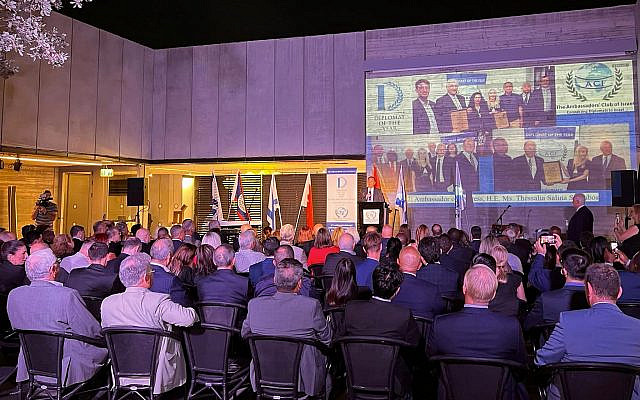 Some 120 people attended the Ambassadors’ Club of Israel’s Sept. 21 “Diplomat of the Year” award ceremony in Herzliyya. (Photo by Larry Luxner)

It was also fitting that Tigran Gasparian, an Israeli singer of Armenian descent, would perform the Hebrew religious song Oseh Shalom on Sept. 21—by coincidence the independence day of both Armenia and Belize—on a stage draped with the flags of Israel, Belize, Morocco and Bahrain.

Gasparian was followed by Lital Peer and her haunting rendition of Birkat Hamelech in both Hebrew and Arabic.

Previous recipients of the “Diplomat of the Year” award include Ambassador Max Haber of Paraguay (2021) and Ambassador Emanuele Giaufret of the European Union (2019).

“Tonight we acknowledge four individuals, two of which are ambassadors, and two who of whom are prominent businessmen who bring a lot of pride to the State of Israel,” said Gil Haskel, chief of protocol at Israel’s Foreign Ministry. “I had the great privilege of receiving both of you ambassadors, Khalid literally when you came off the plane at Ben-Gurion Airport, and Beyyoudh only a few minutes after you crossed over the Allenby Bridge from Jordan.” 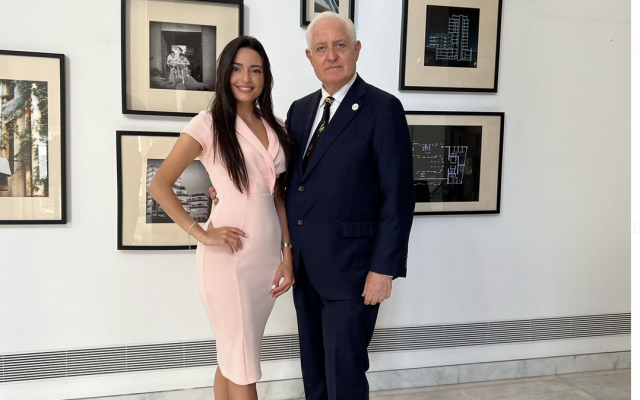 Multilingual singer Lital Peer poses with Yitzhak Eldan, president of the Ambassadors’ Club of Israel, during the club’s “Diplomat of the Year” awards ceremony Sept. 21 in Herzliyya.

Haskel added: “You two represent the Abraham Accords, and I can tell you that Abraham—the father of both our peoples—could not have wished for better representatives than you two. From the moment you arrived, you haven’t taken the smiles off your faces with every single Israeli you meet. You project love and warmth, and this is what these accords are all about.”

Conspicuously absent was Mohamed Mahmoud Fateh Ali Abdulla Al Khaja, who represents the United Arab Emirates as ambassador in Tel Aviv. After all, the UAE signed the Abraham Accords with Israel before anyone else did, and UAE-Israel commerce by far dwarfs combined trade between Israel and the pact’s other three signatories—Bahrain, Morocco and Sudan.

Also skipping the extravaganza, for unknown reasons, were the ambassadors of the two other Arab countries that have long maintained diplomatic relations with Israel: Egypt and Jordan.

Even so, said Zambian Ambassador Martin Mwanambale—dean of Israel’s diplomatic corps: “I feel honored to have been invited to an event at which four of our colleagues are being recognized. Our world is really hungry for peace at the moment, given the conflicts going on around us—the most prominent of which is the war between Russia and Ukraine. I therefore commend the Ambassadors Club for promoting the cause of peace through these awards.” 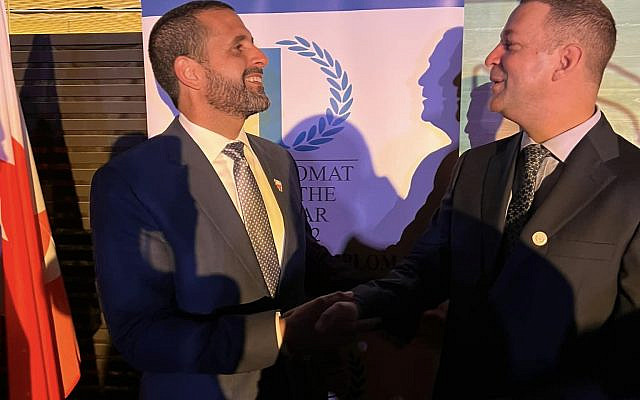 Khaled Yousef Al Jalahma, Bahrain’s ambassador to Israel, and Itsik Kamilian, CEO of the Ambassadors’ Club of Israel, at the Setp. 21 “Diplomat of the Year” ceremony in Herzliyya. (Photo by Larry Luxner)

Uri Rothman, head of the Israeli Foreign Ministry’s Bureau for Middle East Affairs, said the signing of the Abraham Accords on Sept. 15, 2020, in Washington was a turning point.

“Today, we can look back with pride and say these agreements created a new reality in the Middle East. During the last two years, we have established embassies, received multiple visits of dignitaries and sent high-level delegations to and from Abu Dhabi, Dubai, Manama, Rabat and Jerusalem,” he said.

“Israel, the UAE, Bahrain and Morocco are looking into new collaborations in food security, climate change and energy, along with enhancing academic cooperation between universities,” Rothman added. “Our future collaborations span from banking and finance to trade, tourism and scientific research in space. Indeed, there is no limit to our partnerships.”

“The Abraham Accords represent a wish for greater stability in the region. It is also a call for opening barriers from peoples of the Middle East and North Africa, to work together to face the new challenges of our era—such as the shortage of water—so we can better cope,” he said, adding that “we are thankful for our unique alliance with the United States, our greatest ally.” 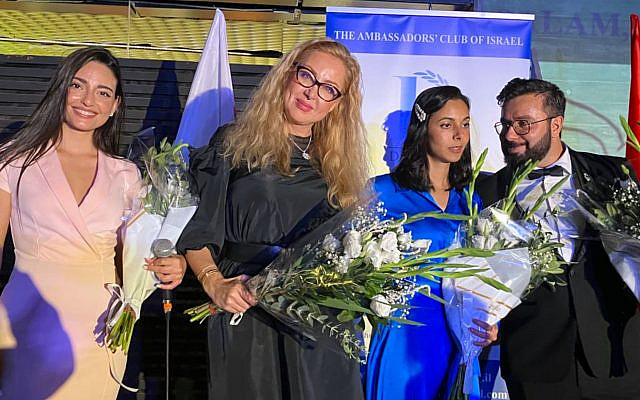 From left: Musicians Lital Peer, Marina Levenzon, Hila Halevi and Tigran Gasparian accept bouquets of flowers at the conclusion of the Sept. 21 “Diplomat of the Year” ceremony in Herzliyya. (Photo by Larry Luxner)

Finally, the “Diplomats of the Year” themselves spoke.

“It is an honor and a pleasure to receive this award, and celebrate with the people of Israel who have been my partners and friends along this new journey,” said Bahrain’s Al Jalahma, whose 760-sq-km island is the smallest sovereign state in the Middle East, and the third-smallest in Asia.

“When I arrived here a year ago, I wasn’t sure how I was going to maneuver these new relations,” he added. “I didn’t have a predecessor to tell me the do’s and don’ts. But surprisingly, I found I had something much more valuable: the Israeli people, who had the will to make sure these relations succeed.”

Beyyoudh, whose North African country is home to 38 million people, charmed the audience by beginning his speech in Hebrew. 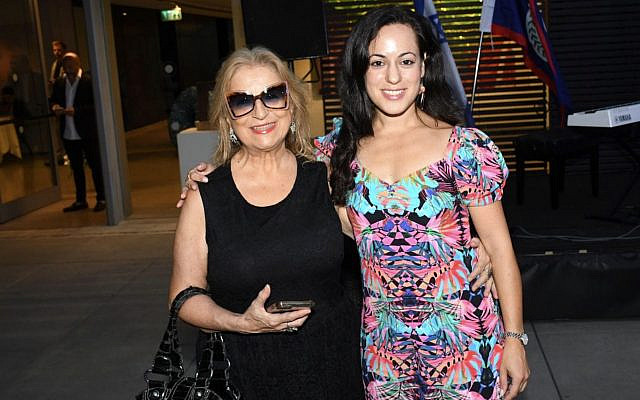 “Ani lo motze et hamilim [I cannot find the words],” he said to loud applause. “It is a great honor for me to be here. Forming relations between Israel and Morocco was a strategic decision of King Muhammad VI following the signing of our trilateral agreement in December 2020 between the US, Israel and Morocco.”

Last month, Moroccan news sources announced that Foreign Minister Nasser Bourita would soon pay a visit to Israel to officially inaugurate an embassy in Tel Aviv, though no specific date has been set.

Beyyoudh, who before his current assignment in Tel Aviv headed the Moroccan Foreign Ministry’s North American and Caribbean division, added: “This award will encourage us to go forward and do more, building on what we’ve achieved in the last year and a half. I personally believe this will lead us to the ultimate goal we’re all looking for, which is peace.”

On that note, Israeli singer Hila Halevi concluded with an inspiring performance of John Lennon’s iconic tune Imagine. Only instead of the verse “no religion too,” she instead sang “peace for me and you”—a subtle effort to avoid insulting anyone’s Jewish—or Muslim—sensitivities.

About the Author
Miami native Larry Luxner, a veteran journalist and photographer, has reported from more than 100 countries in Latin America, Africa, Eastern Europe, the Middle East and Asia for a variety of news outlets. He lived for many years in San Juan, Puerto Rico, and the Washington, D.C., area before relocating to Israel in January 2017.
Related Topics
Related Posts