The Blogs
Jonathan Simmons
Hope over hate. Trade with Israel & Palestine
Apply for a Blog
Advertisement
Please note that the posts on The Blogs are contributed by third parties. The opinions, facts and any media content in them are presented solely by the authors, and neither The Times of Israel nor its partners assume any responsibility for them. Please contact us in case of abuse. In case of abuse,
Report this post. 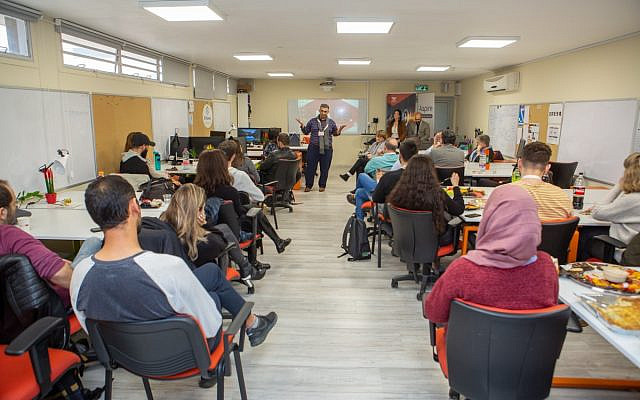 Part 6 in the Partnering for Palestinian Prosperity Series.

With the much of the world news focusing on the Palestinian Leadership’s rejection of the United States ‘Deal of The Century’ between Israeli’s and Palestinians, in this installment of the Partnering for Palestinian Prosperity series, we look at the projects that bring aspiring Israeli and Palestinian entrepreneurs and businesses together.

Some Palestinian entrepreneurs interviewed for this piece have requested anonymity, explaining that unfortunately there is still a limiting mindset among some that working with Israelis, even those that are trying to help Palestinians, is treachery towards the Palestinian cause.

The threat of ‘normalisation’ that is the view you are accepting the Israeli ’occupation’ even when working with Israelis significantly benefits the local Palestinian economy, attacks from radicals is a real threat to the average Palestinian that wants to get on and provide for his family.

Surprisingly to many in the West, Palestine has among the highest literacy rates in the Middle East, and over a dozen universities, from which in IT alone around 1,500 students graduate each year.

However, due to a lack of opportunities, more than half of Palestinian graduates are either unemployed or settle for low-skilled positions outside their field of expertise. Moreover, many of the country’s most talented graduates are joining a ‘brain drain’, taking up opportunities in the Gulf states, the US, Europe and elsewhere.

We look at just a handful of some of the non-political business projects that are spearheading a peaceful, prosperous future for ambitious and talented Palestinian and Israeli entrepreneurs.

The student and the volunteer-led program brings Israeli and Palestinian youths together to learn tech business skills – 3D and graphic design, website creation, app development – and to engage in conflict resolution dialogue. Their vision is to equip the youth of Israeli and Palestinian society with the necessary skills to ensure that there can be greater co-operation and co-existence between Israelis and Palestinians. 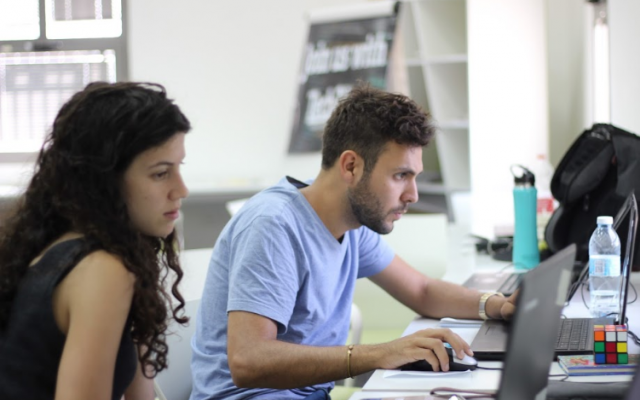 Palestinian entrepreneur Adnan Awni Jaber also says Tech2Peace was the gateway for him to make connections across the border in Israel. “I believe that technology can break walls between any two sides of the conflict because it’s borderless,” Adnan explains in an interview with the BBC. 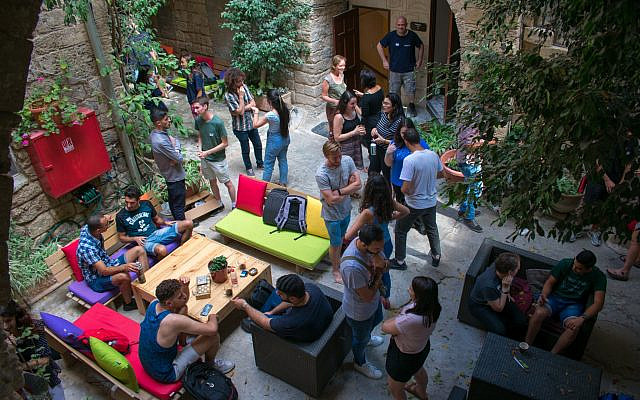 Dana Mor:‘It is amazing how something so simple as Tech, can help change perceptions and humanize the conflict’

“We’re very proud they have equity, the same as all other employees in the company,” Mellanox Chief Executive Eyal Waldman told Reuters in an interview.

With a shortage of engineers in Israel, the growing pool of Palestinian engineers is available to fill any gaps in Israel’s tech sector. Mellanox offered stock options to employees based in the Gaza and West Bank, demonstrate their long term commitment to their engineers in the West Bank and Gaza, and we’re rumoured to receive a whopping $3.5 million in July’s takeover of Mellanox by computer graphics giant Nvidia.

Palestinian IT outsourcing firm, ASAL Technologies’ Marketing Manager, Ibrahim Tannira said the Palestinian tech scene has plenty of fresh minds but few leaders. After he addressed the crowd at Mellanox’s Tel Aviv Headquarters, Palestinians’ proximity to Israel is a big selling point: and despite the Western media’s reporting that often exacerbates cultural differences, there are also cultural commonalities. 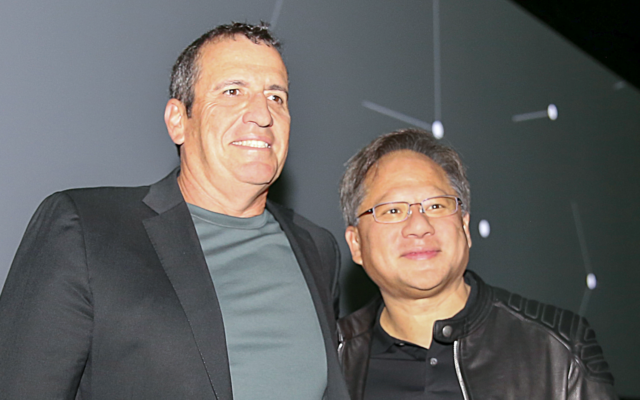 Sari Taha, the city’s tech hub program manager at ASAL Technologies was asked by journalists about problems from the BDS (Boycott, Divestment and Sanction) campaign. The BDS movement campaigns against any form of positive collaboration between Palestinians and Israelis. “Up until this moment, not a single Palestinian IT company has been addressed by the BDS for working with Israeli partners, and I don’t think it ever will because they know they will do more harm than good,”

Serial Israeli entrepreneur Inbal Shenfield, and Amir Grinstein, Professor in Marketing, have created 50/50 Startups, the first entrepreneurship program that helps create and mentor in technology startups that are owned equally by Palestinian and Israeli entrepreneurs.  Hackathons also bring people together from both backgrounds.  The programme has support from Google for Startups.

Inbal: nobody in the technology field wants problems with the Palestinians, we only want solutions”

Cisco has formalized this by creating a 35-company coalition, Ma’antech (“together” in Arabic), comprising everyone from IBM to Israel’s Bank Hapoalim, with the aim of creating jobs for Arab tech workers. So far Cisco is the only one to put money into it. “I’m happy to lead the way, plant the seeds,” says Chambers. HP now outsources some of its research and development to the West Bank. Microsoft Israel has started putting Palestinian engineers in Ramallah on its payroll.

Another glimpse of the future occurred in late May 2020 when Google brought 100 Palestinian and Israeli tech leaders to its new Tel Aviv headquarters for an afternoon of speeches, introductions and dealmaking.

The fortunes of Taha, an East Jerusalemite, were changed by Palestinian Internship Program (PIP), a three-year-old USAID funded initiative that handpicks Palestinian IT graduates and sends them on internships in multinational companies and Israeli startups.

PIP initiative was established by Yadin Kauffman, an American immigrant to Israel who in 2011 co-founded Sadara Ventures, the first venture capital firm to target Palestinian tech startups. PIP’s vision a Palestinian tech and innovation sector driven by a generation of young Palestinian professionals who have access to requisite work experience opportunities.

According to the World Bank, the Palestinian gross domestic product (GDP) has been shrinking since 2013, mostly due to declining foreign aid. 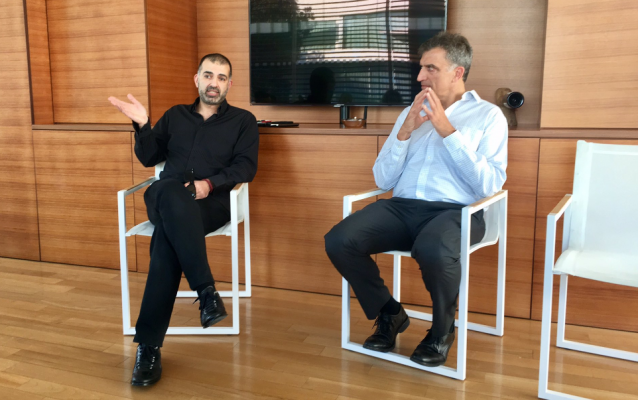 The $30 million investment fund gathered by Sadara Ventures, which is backed by high profile investors including AOL founder Steve Case, former eBay president Jeff Skoll, as well as Google, has so far backed six Palestinian companies, three of which are start-ups.

Post-internship, three-quarters of graduates want to start careers in their field fields at reputable companies. Others have entered post-grad education in the US and UK, or started their own businesses.

“Pretty much everyone agrees it’s in Israel’s interest to have a Palestinian economy that is growing, able to employ people and be successful. Most people here [in Israel], on the right as well as on the left, understand it’s not in our interest to have unemployment or brain drain,” said Kauffman.

“I’ve seen through my work investing in Palestinian companies that there were lots of talented young graduates coming out of Palestinian universities who did not have any opportunity to work and gain experience in a sizeable tech company,” Kauffman said in an interview with The Times of Israel.

Have I missed any projects building bridges in entrepreneurship and business between Israelis and Palestinians? Please share your ideas, views, and hopes for reconciliation below.

Register your email address at openpalestine.com to receive releases on how we in the West can support Palestinians in their positive creative endeavours.

By Jon Simmons, London based Co-Founder of israelinvestment.org

**Discover all of the Israeli-founded companies on the London Stock Exchange, the NASDAQ and the New York Stock Exchange in seconds by downloading your copy of the Israel Stock List ebook at israelinvestment.org/stocksebook First 200 downloads are free **

About the Author
Jon is the director of israelinvestment.org, and co-founded of I61collective, a movement in the UK that facilitates grassroots creative projects in Israel and the West Bank. In the spring Jon supported the opening of the International Prayer Room in Bethlehem. The aim is to encourage Westerners visiting Israel to spend time in the West Bank, and find creative space for sanctuary. During the spring tour, Jon met with Palestinian businessmen and women in the West Bank, to try to understand what they need from Western consumers and businesses to help them and other Palestinians build a financially independent and prosperous future. This inspired Jon to write the series of articles called Partnering for Palestinian Prosperity. The aim of the series is to demonstrate that under very challenging circumstances, Palestinians have persevered to build businesses and viable ventures that are worthy of active encouragement and investment from the West. In 2018, Jon co-lead a group of international and local musicians as part of Music on The Wind tour, performing live to communities on ‘both sides’ of Israel and Palestine. The aim was to invest in the people through the healing and restoration power of live music, regardless of their background. Jon is passionate about the power of using business to bring cohesion between Israel and the Palestinian Territories.
Related Topics
Related Posts
Jonathan Simmons
Comments