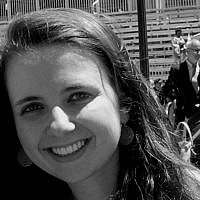 The Blogs
Sarah Gordon
Apply for a Blog
Advertisement
Please note that the posts on The Blogs are contributed by third parties. The opinions, facts and any media content in them are presented solely by the authors, and neither The Times of Israel nor its partners assume any responsibility for them. Please contact us in case of abuse. In case of abuse,
Report this post. 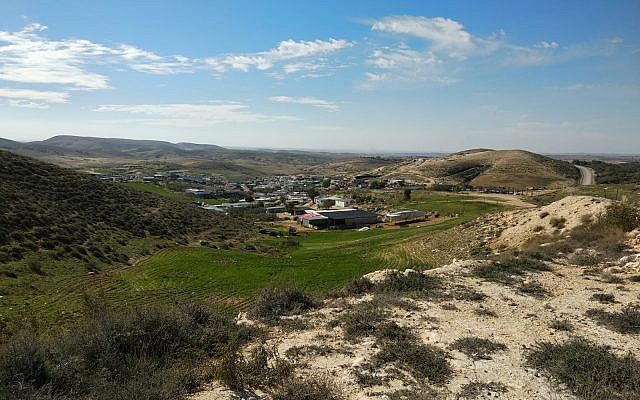 Last weekend, I had the privilege to visit several Bedouin villages in the Negev with political geographer Dr. Thabet Abu Rass. Thabet is currently the co-executive director of a non-profit organization where I am interning called The Abraham Initiatives, which runs shared society projects for Arab and Jewish citizens in Israel. After a few coworkers and I expressed interest in learning more about Israel’s Bedouin population, Thabet graciously offered to take us on a tour to share his expertise in ethnic relations, land-use planning, and regional development, particularly pertaining to the Negev.

Our tour began in the Bedouin town of Hura, near Be’er Sheva. Thabet was invited to give a speech at a memorial service marking two years since the death of Yacoub Abu al-Qiana, a local teacher who died along with a police officer during clashes over home demolition orders in the nearby village of Umm al-Hiran. Joint List leader MK Ayman Odeh, local activists, and prominent community members also spoke at the service.

Umm al-Hiran is one of the 45 unrecognized Bedouin villages in the Negev that are not marked on any Israeli map. Without receiving formal title to the land, residents were moved there in the 1950s under military order as part of a larger effort to relocate different populations in Israel, thereby allowing for future settlement in the new state. In 2002, the government marked Umm al-Hiran as the site for a new Jewish city called Hiran. Since then, the residents’ petitions to the High Court to save their village have been rejected, and Israeli authorities have been working to move everyone to Hura – hence the violence that ensued in January 2017 when police forces arrived with their demolition equipment.

As we drove through the littered, dusty roads of Hura following the ceremony, Thabet explained that residents in unrecognized villages cannot obtain building permits, so all construction is deemed illegal. As a result, the villages do not qualify for municipal services such as water, electricity, paved roads, telephones, sewage systems, schools, and health clinics. Yet Hura, despite its status as a recognized village, suffers from poor infrastructure. While there have been some notable successes over the years, including the construction of a library, community center, and high school, Hura is still one of Israel’s poorest communities. Our tour group discussed how after having already been displaced from their ancestral lands—to which they had a special connection given their traditional lifestyle based on herding and agriculture—and having lived in the same place for nearly 7 decades, Umm al-Hiran residents’ opposition to moving to Hura is not difficult to grasp.

Next, we arrived to a small unrecognized village just a few kilometers from the Green Line. This village was strategically placed close to the border because the military enlisted the residents’ support in defending Israel, given their strong tracking and navigational skills. As we looked down on the village amidst a stunning landscape of rugged mountains, we could see very basic homes made from corrugated metal, many of which were equipped with solar panels for electricity. Residents there purchase water from nearby Jewish communities. By contrast, residents of land that is formally recognized by the state receive electricity and running water, like the elderly Jewish couple who lives on a ranch and runs a pet cemetery just down the road.

Our final stop of the day was the unrecognized village of Alsira. Khalil Al-Amour, a teacher in the community and close friend of Thabet’s, warmly welcomed us into his home. Khalil spoke very honestly with us about the challenges of living in Alsira, from the difficulty of accessing enough water for his family to the threat of house demolitions. Fortunately, after much negotiation with the state, he told us that all of the homes in the village are currently out of harm’s way. Any new construction, however, would be subject to demolition. Khalil described the situation in the village as difficult, but life goes on for his family and community. In fact, he has recently begun renting out part of his home on Airbnb. There are now two women from the U.S. who plan to spend the next few months with Khalil and his family learning about the Bedouin lifestyle and exploring nearby sites like the Dead Sea.

By the end of the day, I found myself feeling overwhelmed by the complexity of the situation in the Negev. It was disheartening to learn about and witness the struggle of a group of people with centuries-old ties to a land from which they have been forcibly removed on several occasions. But it was also uplifting to hear optimism and determination coming from Bedouins and activists working in the area. Khalil, for example, told us about the litigation successes of Adalah – The Legal Center for Arab Minority Rights, including cases in his own village petitioning for access to education and cancellation of home demolition orders. We also met humans rights activist Haia Noach at the memorial service in Hura and learned about her work as the co-founder and executive director of the Negev Coexistence Forum for Civil Equality, an Arab-Jewish organization that aims for recognition of the unrecognized Bedouin villages and civil equality for Bedouins in the Negev more broadly.

The Abraham Initiatives is another organization that runs various programs in the region. For instance, they work to address crime, violence and mistrust between police and citizens in the region through their “Safe Communities” initiative. Additionally, as part of their “Shared Learning” initiative, they pair Arab and Jewish students from local neighboring schools to study mutually selected core curriculum subjects together. Finally, they offer tours on Bedouin society for pre-military academy participants and staff members from universities across the country.

I believe that as Israel continues to develop the Negev region, it should take a more gradual approach, and focus on including Bedouin society while maintaining respect for their cultural traditions. In collaboration with local leaders, the government can start to better address the Bedouins’ subpar socioeconomic conditions and ultimately work towards integrating them into Israeli society with equal rights.

About the Author
Sarah currently works as a Communications and Resource Development Associate for The Abraham Initiatives, a non-profit organization that aims to develop a shared society and promote equality for Arab citizens in Israel. She graduated from Columbia University in 2016 with a B.A. in Psychology and Linguistics. After two years of working in social psychology research, she moved to Lod to participate in the Yahel Social Change Fellowship, through which she volunteered with Arab women and at-risk youth in the city and began working at The Abraham Initiatives.
Related Topics
Related Posts
Comments