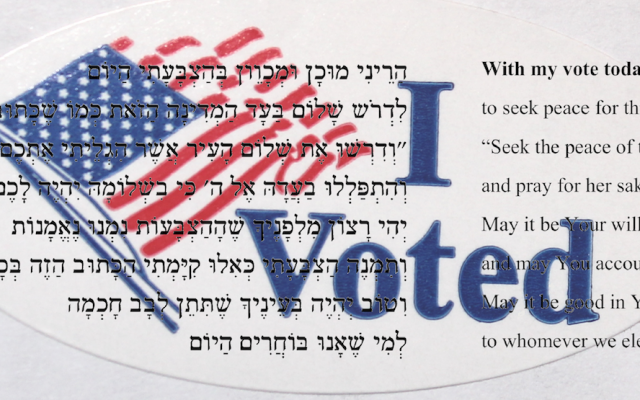 It’s no news that the U.S. faces a unique election in 2020 – the battle is not just over political ideas or policies but about the future of democracy, about the desirability of creating an inclusive society and the possibility of honoring human dignity, what Judaism describes as the image of God in every person.

Fundamental values at the root of our civilization, such as caring for the stranger, have always been honored as much in the breach as in practice, but we seem to be at the tipping point of a world that utterly repudiates those values. And we have already passed the tipping point of global climate disruption, and we are living in a time when every delay in dealing with the fate of the planet could exponentially increase catastrophe.* At the same time, only one of the major political parties is interested in doing anything about that, and that same side is doing everything they can to not count all the votes.

It is commonplace in midrash that Jacob’s strongest weapon is prayer. There are many practical things we can do to fix the world, but we can also use the weapon of prayer, which can empower us and strengthen our resolve. That is why we pray on Rosh Hashanah for all humanity to unite as one band and for the rule of the arrogant to be removed from the Earth. That is why I wrote a prayer for voting in 2004.

For 2020, I rewrote the prayer to fit this time when elections have become spread out over many weeks and months due to the pandemic. It also seemed important to include a plea for healing in the prayer. And I added several lines to the prayer addressing the danger to democracy we are facing (see the paragraph beginning “Tear out”). These lines are based on a blessing in the Amidah (the central prayer of Jewish liturgy) that asks for God to cut off the arrogant and the “minim”. Minim is usually interpreted to mean sectarians—that is, heretics—but literally, it means people who sow division. That is an apt description of the wave of populism that has overwhelmed so much of the globe.

Here’s the English prayer, which also includes a pledge to do something more than vote. (Download a PDF with Hebrew along with transliteration from http://neohasid.org/resources/votingprayer/).

Behold, I am intending
through my vote and my prayer
to seek peace for this country,
as it is written (Jer. 29:7):

“Seek the peace of the city
where I cause you to roam
and pray for her to YHVH (Hashem/Adonai/God),
for in her peace you all will have peace.”

May it be Your will, YHVH, that votes
be counted faithfully
and may You count my vote
as if I had fulfilled this verse
with all my power.

May You give a listening heart
to whomever we elect
and may it be good in Your eyes
to raise for us a good government
to bring healing, justice and peace
to all living in this land
and to all the world, and upon Jerusalem,
a government that will honor the image of God
in all humanity and in Creation,
for rulership is Yours.

Just as I have participated (or: will participate) in the election
so may I merit to do good works
and to repair the world through all my efforts,
and through the act of… [fill in your pledge]
which I pledge to do
on behalf of all living creatures,
in remembrance of the covenant of Noah’s waters,
to protect and to not destroy
the earth and her plenitude.

Tear out tyranny and despotism,
ruin those who cheat and deceive,
upend and overthrow those who oppress the vulnerable,
make the reign of the arrogant disappear from the land, and
pulverize the plans of those who attack democracy.
Obstruct them, humble them, and bring on their downfall, soon, in our days.

Give to all the peoples of this country
the strength and will to pursue righteousness
and to seek peace as unified force
to uproot racism and violence
and to make healing, good life and peace flourish
here and throughout the world
and fulfill for us the verse (Ps. 90:17):

I have been saying this prayer every day since mid-October and will continue saying it until the election is over. What makes the prayer specifically Jewish is not just that it’s in Hebrew or that it quotes Tanakh. It also starts with the framework that we may see ourselves as living in exile, and it adds a pledge to take further action beyond voting, which is similar to what we do when we say Yizkor.

The part of the prayer written specifically for 2020 started as an expansion of birkat ha-minim, the twelfth blessing of the Amidah. In the traditional blessing, there is a string of verbs directed against the arrogant, or “malkhut zadon”, the government of arrogance, or “malkhut harish’ah”, the government of wickedness (depending on the prayerbook). I’ve used those verbs as the backbone for lines that focus on the deterioration of democracy that has unfolded in the US and elsewhere. As mentioned, this focus shifts the meaning of minim from “heretics” to “those who sow division” – an apt description of what the politics of hatred and fear does.

Here is just the part of the prayer based on birkat ha-minim, along with the Hebrew it is based on:

Tear out tyranny and despotism,
ruin those who cheat and deceive,
upend and overthrow those who oppress the vulnerable,
make the reign of the arrogant disappear from the land, and
pulverize the plans of those who attack democracy.
Obstruct them, humble them, and bring on their downfall, soon, in our days.

Because these lines are based on birkat ha-minim, they can also be added to that blessing in the Amidah itself, like this:

For those who sow division and slander let there be no hope
and may all the arrogant become lost
and every enemy and hater quickly cut off.
Tear out tyranny and despotism,
ruin those who cheat and deceive,
upend and overthrow those who oppress the vulnerable.
Make the reign of the arrogant disappear from the land, and
pulverize the plans of those who attack democracy.
Obstruct them, humble them, and bring on their downfall, soon, in our days.
Blessed be You who breaks enemies and humbles the arrogant.

When I wrote these lines, I conceived of them as a separate addition to the voting prayer, in the same way that birkat ha-minim was an addition to the Amidah and not part of the original eighteen blessings.

The prayer also does not directly mention any particular government or politician. Generally speaking, I don’t like the idea of prayer that is partisan. Nevertheless, the danger we face today is so direct and real that I decided to use acrostic in both Hebrew and English to allude specifically to the 2020 election. I imagine that there will be some people who prefer to use a prayer that does not allude to this election and that focuses only on the positive. For those people, it’s easy to skip that paragraph, but I’ve also published a version without it that can be downloaded from the same website, neohasid.org.

I hope that all of us, regardless of our political affiliation or ideology, can pray for an end to tyranny and oppression when we vote. May the best part of our prayers be answered, for the healing of the world and the well-being of the Jewish people, of all humanity, and of all Creation.

* Climate change is unfolding five times faster in the land of Israel and Palestine than the global average. Learn more here.