It all started during an email exchange between me, my husband, and “Josep” — the Christian Catalan addressee of my blog and first book, Letters to Josep: An Introduction to Judaism.

I had written something about my sons’ future IDF service, and Josep mentioned that when they go to the army, he wants them to send him an IDF t-shirt. (Neither Eitan nor I had the heart to tell him that IDF soldiers actually don’t wear t-shirts with the IDF insignia; they wear practical white cotton undershirts under their uniforms…) But Eitan — who is a tour guide — wrote that he could get one for Josep anytime, as they are ubiquitous at all the touristy places he takes his clients.

Off the record, I scolded my husband: “Did you notice that I didn’t offer?!”

…You see, the problem with being the only Israeli friend of a staunchly pro-Israel European is that I live in a gold mine of random doodads that would make him beside himself with joy. If I indulged every impulse to get him a gift, I’d single-handedly clean out the entire Israeli souvenir industry.

“What?” said Eitan defensively. “I kinda like the idea of him walking around Barcelona with an IDF t-shirt.”

“Because you want to make him a perfect target for an Islamist sniper?!” I demanded.

Though Eitan insisted that he intended to act on this casual offer, I knew he wouldn’t — and that I would instead. I am the designated Rememberer of Things in our family, and I’m also extremely uptight about people holding to their word. If I say I’ll do something, by God, I’ll do it — and in this case, Eitan saying he’d do it was basically the same thing.

And indeed, for the next several months Eitan walked straight past every tourist shop without stopping to pick up an IDF t-shirt, while I pretended not to care. It was only shortly after Sukkot this year when we were touring with my in-laws in the Artist’s Colony in Tzfat that I gave in and bought the blasted thing myself.

Upon returning home to Tekoa, I set about shipping it to Josep. But then I realized that I had a problem.

I didn’t know what country I was sending it to.

Allow me to explain. On October 1, the government of Catalonia (the region where Josep lives) held a now-infamous independence referendum — and the vast majority of voters who braved the Spanish police batons and rubber bullets elected to secede from Spain. On October 10, Catalan president Carles Puigdemont made a confusing speech wherein he sort of declared independence and then immediately suspended its effects… or maybe didn’t declare independence at all, but merely his intention to do so, unless Spain would negotiate with his government? By the time I was addressing the envelope, it seemed pretty clear that Spain had no intention of negotiating and was preparing to invoke Article 155 of the Spanish Constitution, nullifying Catalonia’s self-government; and Catalonia was preparing to declare independence (…or was it lift the suspension of the declaration of October 10th?) in response.

Basically, the place I was sending the shirt to was, at that moment, part of Spain, but was very likely to declare itself independent while the package was in transit.

So should I address it to “Catalunya, España” like I used to?

On the one hand, no one was likely to recognize Catalonia as an independent country very soon. The US and EU had both come out supporting “Spanish unity” and no one seemed particularly keen to support the Catalans. So, by all accounts, it would not be remiss of me to add “España.” On the other hand, as I have made clear before, I am unapologetically biased in favor of Catalan independence for the simple reason that Josep has always supported it. I knew he wouldn’t really care, but what if I offended whatever Catalans might be handling the mail by addressing the parcel to a country they no longer considered themselves part of?

So I wrote “Catalunya” and left it at that, figuring I could always scribble in “Spain” later if need be. My husband — who, the record will show, is the Doer of Things in our family — ended up taking it to the post office, and after some discussion with the clerk, they decided it would be best to add “Spain.” So Eitan scribbled: “Spain (?),” adding a question mark to reflect his bemusement, and sent it on its way.

It normally takes around 7-10 days for an item from Israel to reach Barcelona.

Well, the following things occurred during the 10 days after we sent the package:

…I figured it was likely for the mail to be functioning a little slower than usual.

So I wasn’t particularly bothered when the thing still hadn’t turned up after two weeks. But when another week went by, I checked the tracking information on the website, and it said something confusing about an “unknown recipient.” I asked Josep to look into it, and he told me the item was being returned to me.

Josep said that the guy in charge of delivering parcels there knows him personally and has delivered things to him once or twice a month for the two years he’d been living in that apartment. I had addressed the envelope correctly, it had passed through the classification process and arrived at the local post office with no problem, and the last thing I’d sent to that address (yes, another moment of weakness in the face of a random item I knew Josep would love) arrived with no issues.

So what was different this time? What caused the mailman’s sudden amnesia as to Josep’s identity and whereabouts?

There was only one thing we could think of.

The little question mark that Eitan had written next to the word “Spain.”

Josep explained to me that Correos de España, the Spanish postal service, is fiercely pro-unity. It would appear that the postman decided that Josep did not deserve to receive his item because the sender had, with those two little pen strokes, called Spanish sovereignty over Catalonia into question!

And here I’d been worrying that the Catalans would be offended if I did write “Spain” in the address. I never expected….. the Spanish Postal Opposition! 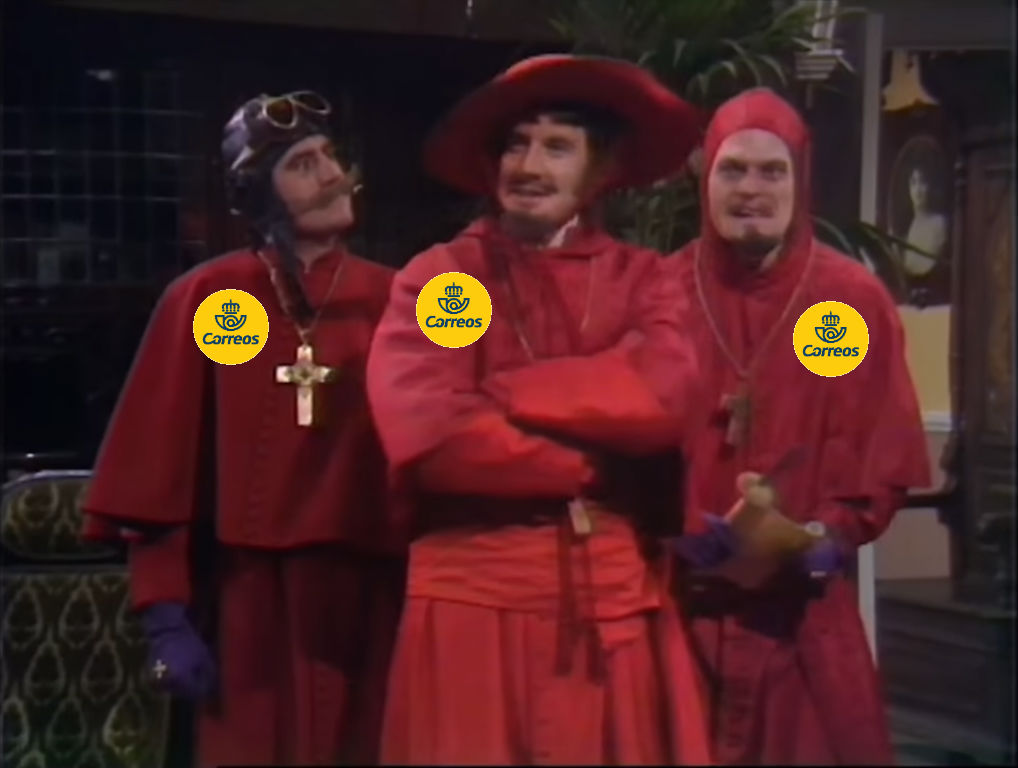 Not one to give up easily, I contacted Correos through their Facebook page at the suggestion of another friend of mine — a Canadian living in Catalonia. They surprised me with a prompt, seemingly helpful response in impeccable English: they asked for Josep’s address, and informed me that they were trying to “recover” the package and send it back, explaining that “the address on the cover was incorrect.” (Mmm-hmm.) They told me to wait a few days.

I should have known what “a few days” means in Spanish-time.

For two weeks, I pestered them every few days to ask what was going on, until I finally squeezed the following explanation out of them: they had given an order for Customs to stop the package from leaving the country and send it back, but Customs had not responded. They claimed the item was not lost, it was simply waiting to be “recovered” by Customs.

In other words, they absolved themselves of all responsibility, and the chances that the thing would turn up were now approaching zero.

During this episode, Eitan and I took a Friday morning stroll to the local grocery store, and on our way, we stopped to check our mail. In our mailbox was an envelope addressed to Eitan with a King Filipe postal stamp and Correos postmarks — and no return address.

“Whaaaaat is this?” I exclaimed, snatching it from him and opening it. 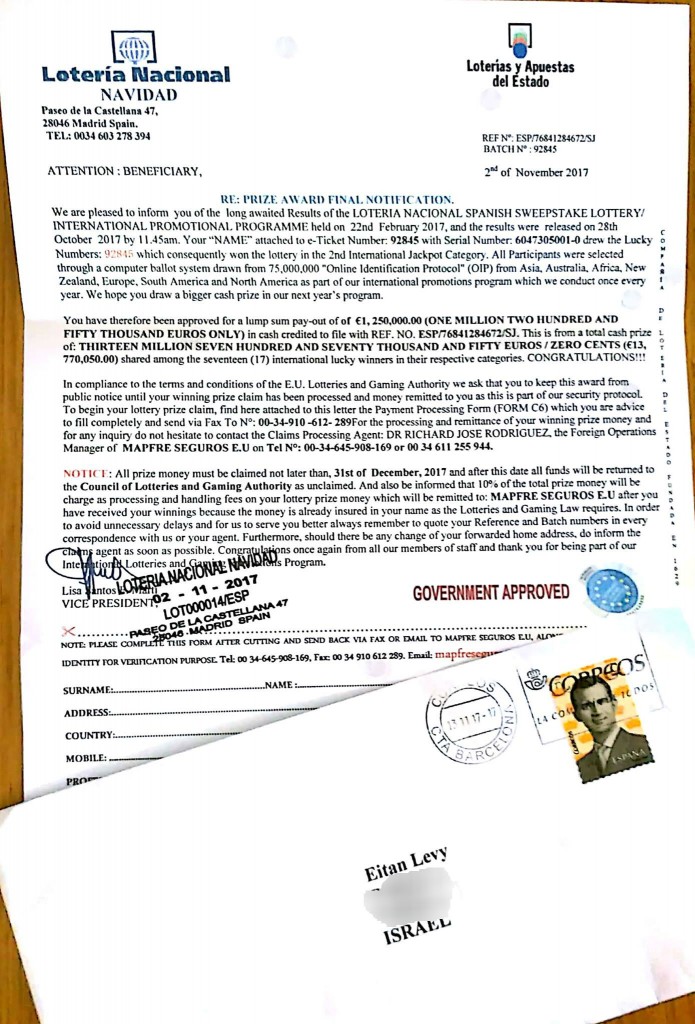 “Attention: Recipient,” it reads, “we are pleased to inform you of the long awaited Results of the LOTERIA NACIONAL SPANISH SWEEPSTAKES LOTTERY”… and could we please send our bank details to such and such address in Madrid to claim our million+ Euros?

After finally recovering from my fit of hysterical laughter, I sent that image to both Josep and my Canadian friend in Girona. Both responded with a sort of exhausted resign. Apparently, such spam letters are extremely common in Spain. And it would seem that our indignant mailman had not only confiscated our gift and delivered it into Spanish bureaucratic oblivion, but had also been kind enough to pass on our address to Spanish scammers.

About a month after Correos told me to wait “a few days,” I finally gave up and relentlessly nagged my husband until he bought acquired a replacement. This time I addressed it like this: 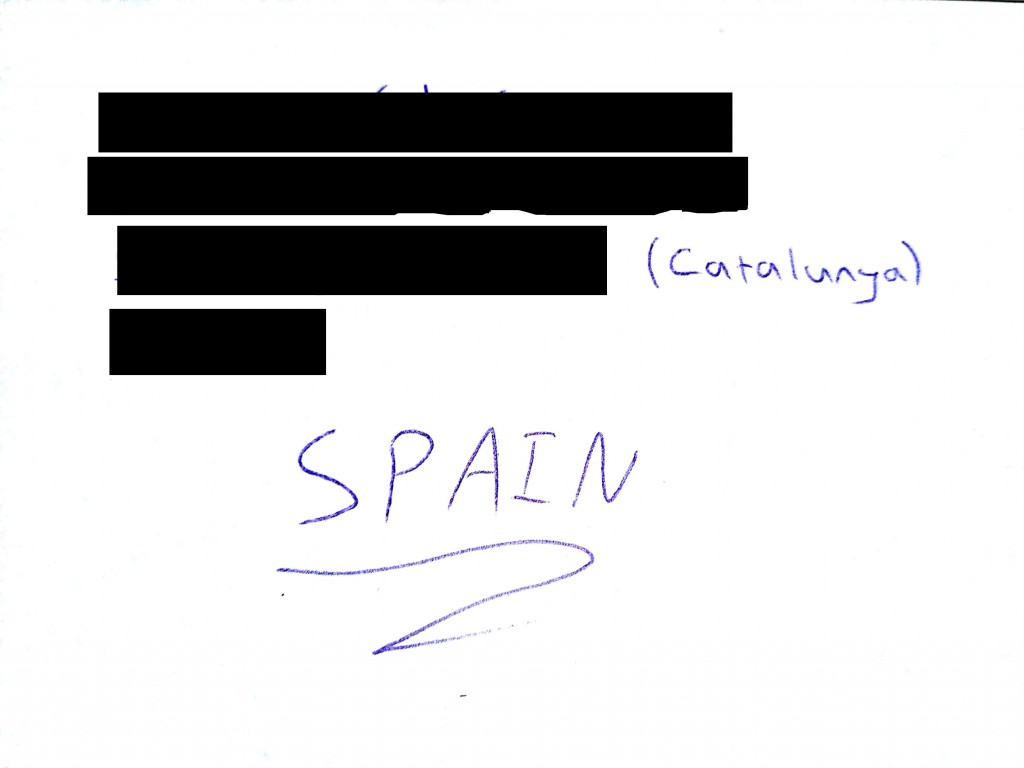 “Should I add ‘VIVA ESPAÑA’ and draw little Spanish coats of arms all over it?” I quipped to Josep.

I was sorely tempted to tack on a comment in Hebrew along the lines of “yimakh shimkhem, ya fashistim” (“may your name be obliterated, you fascists”), but I figured that with my luck, the envelope would find itself in the hands of that one guy at Correos who happened to study Hebrew in college.

And while I really wanted to stick it to Spain, I also wanted Josep to actually have the damn thing.

So instead, I grabbed a piece of paper and my kids’ markers, drew this, and tucked it into the envelope alongside the shirt. 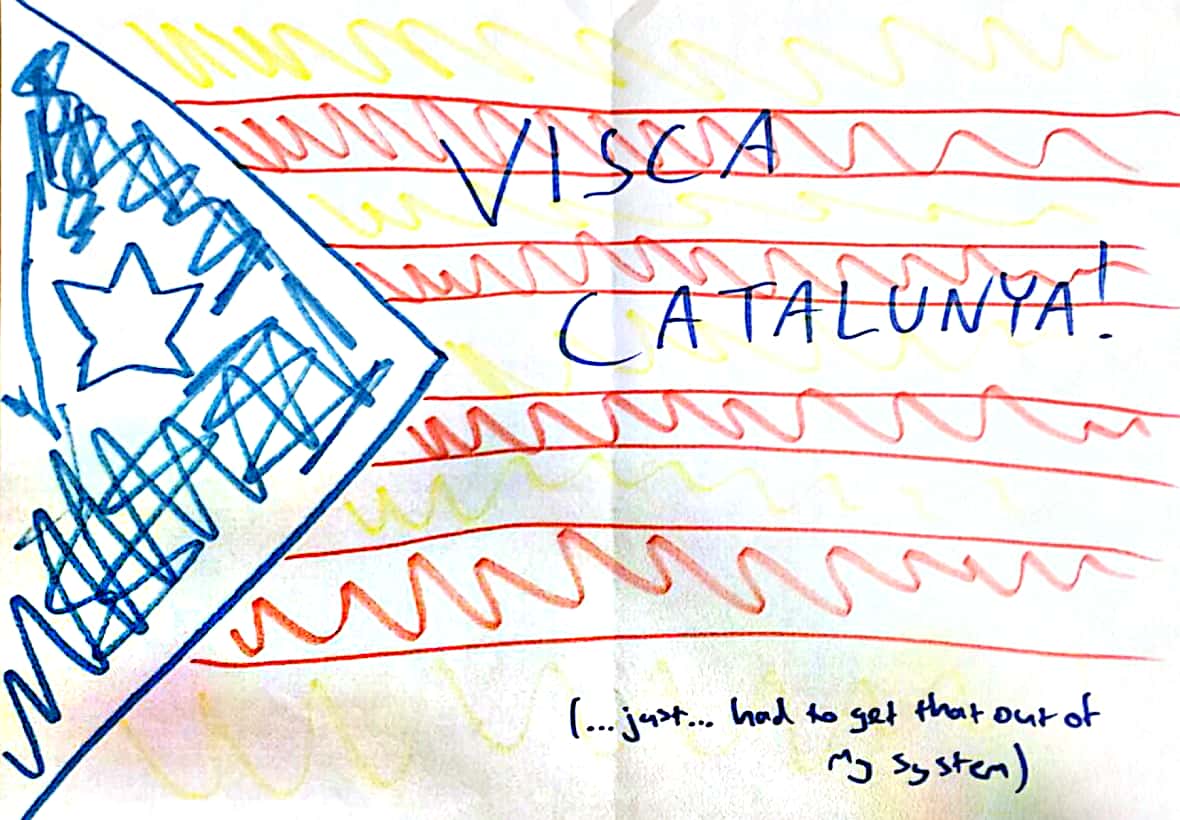 A… um… rough sketch of the estelada — the flag of the Catalan pro-independence movement–with “VISCA CATALUNYA!” (“Long live Catalonia!”) scrawled across it and a comment on the bottom: “(…just… had to get that out of my system)”

…Of course, I mailed it on December 18, three days before the fateful December 21 elections and a week before Christmas.

Bad timing seems to be my specialty.

But, to my relief, 12 days later — after a pro-independence government had once again been elected by the people of Catalonia — the mailman miraculously remembered who Josep is. 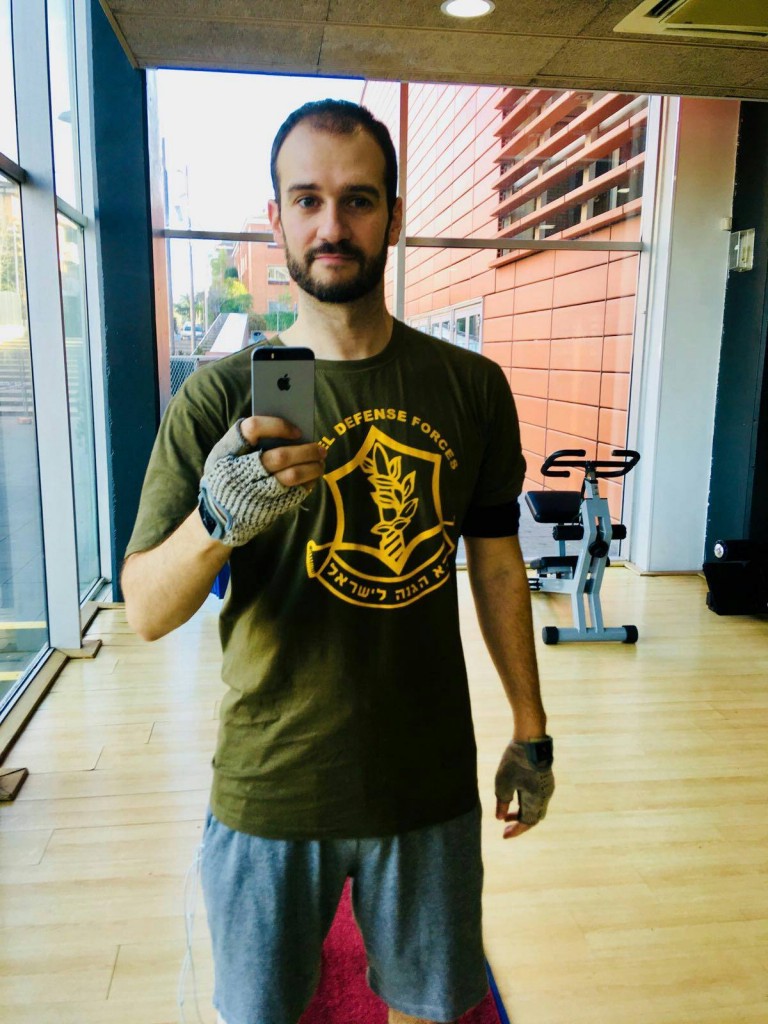 And while we’re here, ladies, did I mention that he’s single?

The future of Catalonia remains a mystery… and so do the whereabouts of the first envelope. For all we know, between the question mark, the West Bank return address, and the pro-IDF contents, it was taken hostage, interrogated by the useless Spanish secret service (the one that had ties with the terrorist who planned the Barcelona attacks in August), and then burned as an effigy.

Or maybe it is now ensconced in a different wardrobe in Spain.

Perhaps in the wardrobe of the scammer who is still waiting for my bank details.

About the Author
Daniella Levy is the author of Disengagement, By Light of Hidden Candles, and Letters to Josep. Her prose and poetry — in 3 languages — have been widely published, and she was nominated for the Pushcart Prize for her short fiction. She is also a freelance copy and content writer. Born in the USA, she immigrated to Israel as a child, and currently lives at the edge of the Judean Desert with her husband and four kids. You can learn more about Daniella and her work at Daniella-Levy.com.
Related Topics
Related Posts
Comments