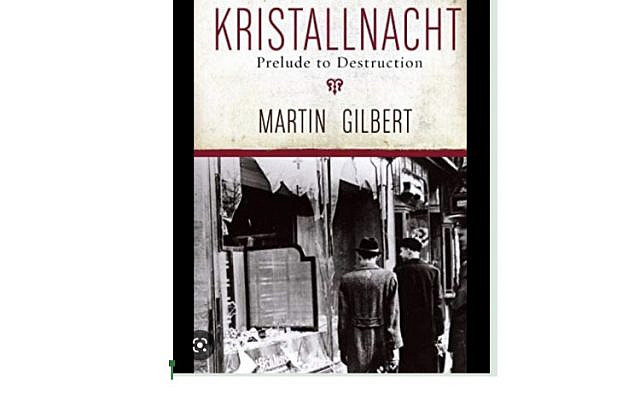 Image: Cover of the book “Kristallnacht: Prelude to Destruction” by Martin Gilbert” https://www.amazon.com/Kristallnacht-Prelude-Destruction-Making-History/dp/0061121355

On November 9th, America will observe Kristallnacht with a premeditated act of state-sponsored murder in Texas that will inaugurate an unprecedented month of planned slaughter across our nation.

For those unfamiliar, Kristallnacht (German: “Night of Broken Glass”) was an infamous pogrom against Jews that the Nazis, Hitler Youth and German civilians carried out across Nazi Germany on 9–10 November 1938. The name Kristallnacht is derived from the shards of broken glass that littered the streets after the windows of synagogues and Jewish-owned stores and buildings were smashed. Jewish homes, hospitals and schools were ransacked, 267 synagogues and over 7,000 Jewish businesses were attacked or destroyed, and 30,000 Jewish men were arrested and incarcerated in concentration camps. The exact number of victims is unknown, ranging from 91 Jews murdered to a death toll in the several hundreds when considering post-arrest maltreatment and suicides.

Historians view Kristallnacht as the ominous prelude to the Final Solution and the murder of six million Jews during the Holocaust.

Let us be very clear: Texas’ observance of this day via state-sponsored murder is NOT another Kristallnacht. The Holocaust was a genocide of horrific and singular proportions and one that impacts generations of Jews and human beings, including many of our members in “L’chaim! Jews Against the Death Penalty,” myself included. And yet, there are synchronicities that cannot be ignored if we wish at all to learn from history…

First and foremost, the means of state murder that Texas will employ on that day is lethal injection. Lethal injection was first implemented in our world by the Nazis in 1939 as part of their infamous Aktion T4 Protocol to kill people deemed “unworthy of life,” as designed by Dr. Karl Brandt, personal physician of Adolf Hitler. Like the various American gas chambers now being utilized for state killings, including via Zyklon B, every use of lethal injection carries on this Nazi legacy.

And there is more…

Just as Kristallnacht opened the floodgates for more killing, so too does America’s Kristallnacht Execution serve to open a Pandora’s Box of American slaughter in the month of November. After the Nov. 9th killing, our nation will carry out double state murders on Nov. 16th and again Nov. 17th, courtesy of four different US states. A fifth state will then seal this month of death with another killing on November 29th. This will bring the tally to six state murders in November alone, as of this writing. As our colleagues at Death Penalty Action remind us, the last time the world witnessed six American executions in one month was January, 2015 – nearly eight years ago. Dozens more American execution warrants already have been signed for subsequent months, with over two dozen having been scheduled in Oklahoma alone. Death penalty abolitionists have warned of this onslaught of slaughter for many years; now, we are beginning to see this American Death March unfold…with no end in sight. Holocaust survivor and Nobel laureate Elie Wiesel knew very well of the danger of courting the Angel of Death, and famously said of capital punishment: “Death is not the answer.” Prof. Wiesel also said this, which is akin our anthem at L’chaim:

It is for this reason that renowned Jewish leaders such as Martin Buber were appalled at the Israeli government’s execution of Adolf Eichmann and protested it until the very end. Indeed, over time more and more Holocaust survivors like Eva Mosez Kor and their scions began to champion ideas of restorative justice, rather than execution. For a most powerful example of this, please see this stirring op ed from renowned Jewish abolitionist and fellow third-generation Holocaust survivor Stephen Cooper, entitled “A Life Without Parole Sentence – not the Death Penalty – for Hitler.”

We, the members of “L’chaim! Jews Against the Death Penalty,” stand in the gap with countless other groups demanding that the United States join the over 70% of nations in the world to abolish this horror from our land – without exception. There are signs of hope that we are “moving the needle” on this human rights abomination here in the USA. A most recent example as of this writing is the high-profile victory over the Angel of Death in the case of the horrific Parkland shooting in Florida, where a jury did NOT sentence the gunman to state murder. Please see this erudite and impassioned response in support of this verdict from Rev. Sharon Risher, herself the child and relative of mass shooting victims. And yet, even this decision that is in line with the most basic global consensus on human rights did not come without an overwhelming public backlash. Indeed, just as the American Kristallnacht execution of Nov. 9th threatens to inaugurate a November of Death in our land, we clearly still have MUCH work to do to keep the momentum building toward the creation of a more civilized society.

In the past year alone, America has stained some of the most hallowed and solemn dates on the Jewish calendar with the blood of state murder victims. This included a completed double murder on International Holocaust Remembrance Day,  an attempted murder on Yom Hashoah – Holocaust Memorial Day, and another murder on Yom Kippur. How many more horrific synchronicities will it take before our eyes are opened to this American nightmare?

Posterity will know the side on which we stood on this most vital issue. Please, do consider joining us in learning the lessons of the past as we give meaning to the phrase: NEVER AGAIN!