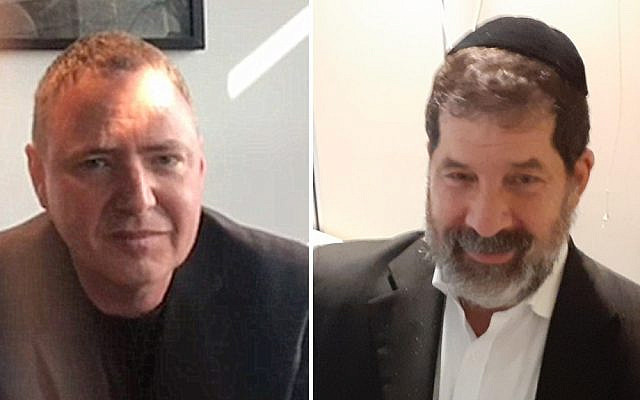 I recently upset some people with a series of articles calling for sweeping changes in secular-Haredi relations in Israel and concluding it was a more urgent matter than even the festering Palestinian question. One took the trouble to write, leading to an illuminating exchange.

I have reported here before on a correspondence with Rabbi Herschel Grossman, which had touched on the loftier question of faith. The issue now was more prosaic: I argued secular Israelis were enabling a racket that would soon make them a minority in a theocratic and impoverished state.

“Heshy” struck back: “I was surprised and dismayed at your recent column (or calumny) in the Times of Israel,” he wrote. ”You should be ashamed of yourself for writing such a slanderous screed.”

He has a way with words, and although we’ve never met, our previous exchange created sufficient camaraderie for this charge to sting. I assured him no slander was intended, but neither do I feel shame. Over about two weeks we debated by email, with Heshy attacking my arguments and making some pointed ones of his own.

He started off rather aggressively: “My friends, relatives, colleagues and teachers are just as smart as you, and I find that secular critics use mockery and ridicule rather that honest intellectual debate. Your recent columns are … distortions, and an open call to harm the Haredi family.”

But he also seemed genuinely pained at my (falsely) presumed ignorance of Judaism and (correctly) perceived disinterest in organized religion of every stripe. Eventually I was quite gratified to read this: “I feel that you are a mentsch, and a decent person, and not possessed by the blind hatred of many rabid secularists.”

I am reproducing here bits and pieces of this somewhat rare secular-Haredi dialogue with Heshy’s kind permission.

I wrote that secular Israel funds its own destruction through undue generosity that enables the Haredim to continue the current trajectory (albeit still in widespread poverty). This comes in the form of various discounts, child stipends and the lifelong yeshiva payments (whereas students of computer science pay tuition). This, on top of the considerable funding directed toward the religious bureaucracy in Israel, from Kashrut supervisors to mikvaot to rabbinical courts to Rabbinate apparatchiks.

Heshy made a good point: “Every sector in society fights for their fair share of the budget. The trick of the budget has always been to put expenditures for Haredim as special bequests, while other money grabbers have their payoffs built into the law.

“Please explain why anyone needs to be paying for a special plane for the Israeli basketball team (and) why we need to pay for stadiums hosting grown men kicking a ball, and paying millions to train young men to do the same. Are your museums economically productive? HaBima Theater? Israeli Opera?”

I am, like many and probably most secular people in Israel, annoyed at the various ways in which the state, at the behest of the religious, imposes the Sabbath, impeding public transport and most forms of commerce.

Heshy did not concur, largely based on a view that Israel cannot be Jewish the way, say, that Romania is Romanian: a national group dominates. He feels that in a Jewish state the public sphere cannot trample upon the Jewish religion.

I found his arguments inconsistent. At one point he said that “because Haredim have ambivalent views regarding the sanctity of the State, they do not see it as their G-d given mission to transform the State into a vehicle for submitting others to their hegemony. Haredim do not want to impose Halachic observance on an unwilling public.”

But then he added that the status quo that must be maintained includes “official observance of Judaism” and “personal status issues resolved in accordance with traditional Jewish law,” so as to “make it possible for us to live together as one nation.”

The fact that yeshiva students are given a pass from the military enrages most secular Israelis, who are forced to risk their lives, and it also inflates the rolls of the seminaries. It doesn’t add good karma that the Haredi parties automatically support the right and that Haredim are a large presence in settlements across the Green Line, which can be presented as a case of causing conflicts for others to fight.

I actually suggested that the pass be maintained without drafting yeshiva students, because the last thing the army needs is religious soldiers policing kosher laws and becoming agitated by women officers with their uniforms too tight.

Heshy asserted that “a compromise would actually be feasible … when the students are a bit older, past the critical formative years in Yeshiva, but for boys only. Forcing religious girls out of the family domain into national service would lead to a civil war.”  Still, he said, decades of mistrust prevents such a deal: “We believe that many secular leaders say ‘shared burden,’ but what they actually want is to destroy our yeshivos and harm our way of life.”

I had railed against the high proportion of Haredi schools them that do not teach science, math and English, condemning the graduates to poverty and dependence and harming society overall. I proposed cutting off state funding as a first step, then taking even harsher steps to stamp it out.

I did not identify a defense of this argument beyond the need for independence as a survival mechanism, and a hint that one day they will be more open: “A core non-negotiable Haredi demand is complete educational independence. They know that there are secular forces of influence who will try to re-educate their youth.

“Because this binary option has been presented to them – our way or yours – they choose the current system. Why do most Haredi children in Western countries receive a broad secular education? Apparently, the lack of secular studies is not an ironclad Haredi position, but a response to the cultural climate in Israel.”

I’m not sure what to do. Be nicer about demanding math in classes?

Heshy added: “Perhaps we should discuss instead why Jewish children are left Jewishly illiterate in this country. Who is afraid of whose ideas?”

The independence of the school system also came up in the context of the installment  condemning the Haredim for opening their schools in flagrant violation of government guidelines during the recent closure.  Heshy said “yeshivos are the beating heart” of their society.  When Haredim eventually saw that confusion and political infighting drove decisions they did what they needed to for their youth.

I wrote: “You keep talking about what the Haredim will accept and cannot accept. You seem to think you get more of a right to an autonomy here than in other places.”

I presented the treatment of women in Haredi circles as unacceptable inequality for a modern country.  To me this begins with the basic notion of gender roles and leads to calls for segregated buses, opposition to women singing in public, exclusively male yeshivot and banishment of women from the Haredi parties’ Knesset lists.

I could not get Heshy to condemn any of this. He was unshakable in his conviction that women have a naturally specific role which in Haredi society, if anything, elevates them. He said many educational and social decisions in Haredi society are made by women, ‘who are more educated and aware than you imagine.”

“Women are actually treated much better – with more respect and dignity – in our society than yours,” he insisted. “In general, our women and girls are happier and more fulfilled than their secular counterparts. … Many secular women feel cheated because they were promised fulfillment if they forego marriage and family and pursue a career, and are now sad and alone.”

According to official figures, the overall workforce participation for Israeli men in 2018 was 82 percent, which would be even higher factoring out Haredi men, whose own participation was 48 percent.  I considered this a terrible by-product of the obsession with Torah study even for non-sages.

Heshy noted that Haredim elsewhere work, whereas their compatriots in Israel “need to adapt to the unique setup forced upon them by the secular authorities” who demand military duty before work and give secular universities undue power over training:  “In Western countries, Haredim have created and facilitated numerous avenues for quick and efficient professional training and degrees.”

In a move I thought bold, I argued the Haredi birthrate, with families of 12 not uncommon, is a problem for two reasons. First, such families will almost always be poor and have trouble giving each child enough attention. Second, the Haredim (despite the small attrition rate) will go from being perhaps an eighth of the country today to a majority in a few generations.  The secular will flee and Start-Up Nation will be history.

Heshy did not much quibble with my math but simply viewed it as no disaster: “Our future is much brighter than yours. Why won’t you look in the mirror and think why that is so, rather than pointing your finger at us?”

Heshy was concerned for the safety of Haredim, and pointed out cases in which Haredi kids were bullied and harassed, seeming to assign some blame to me as well: “The campaign you are on now is low and dishonest, and you utilize a bully pulpit to shame and slander a million people who never did you any harm.”

“I’m very sorry to see these things and would never defend them.” I wrote, expressing hope his own family was unaffected. “Happens every day,” he replied. “We are used to it … just like in NY where I grew up, and they called us ‘dirty Jew.’”

This did lead to a certain softening of the tone: “Religious people do understand the secular resentment towards Haredim in this country. These tensions are unfortunate, but, to a large degree, not of our own making. There are two sides responsible for the current morass.”

What can be learned from all this? I honestly cannot say.

It is interesting that although we are clearly in a culture war, I have great sympathy for him; perhaps I am a sap.

But I also note that if Heshy is representative, compromise is not likely. It is possible that the Holy Land will need two partitions, not just one: in addition to between Jews and Palestinians, between secular and Haredim.

I offered a deal: continued draft-dodging in exchange for national service; opening up commerce and public transport in secular areas on the Sabbath; and reasonable birthrates. In return, I would show up in Jerusalem and dutifully study Talmud; I have studied physics, and this cannot be worse.

He did not reject it outright. But he did send me a picture of the yeshiva study hall with one seat conspicuously unoccupied.