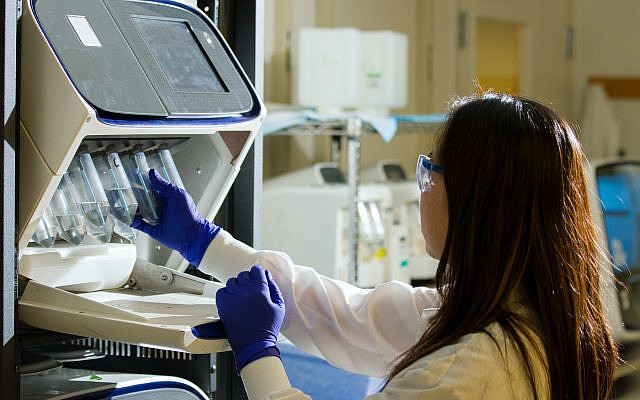 Israel is set to position itself at the forefront of a digital revolution in healthcare, sparked by the Covid-19 pandemic and new developments in biotechnology.

We can already see evidence of the impact that Israel’s making in the world of biotech through the waves being made by its startups across the industry. The most notable recent development for Israeli companies can be found in CorNeat Vision, and the $4 million allocated to the startup by the Guangzhou Sino-Israel Biotech Investment Fund (GIBF) in late August.

The money raised is set to be invested in CorNeat’s Chinese subsidiary, which has been set up in Guangzhou – whilst the goal of the investment is ultimately to bolster CorNeats presence and activity in the Chinese market, which includes clinical trials, the setting up of facilities and marketing the company’s first two products.

CorNeat was founded in 2015 by Gilad Litvin and Almog Aley-Raz, and the company develops synthetic corneas that operate through the insertion of artificial optics under the membrane that covers the white of the eyes. The process is dependent on nanoscale chemical engineering to stimulate cell growth and integrate the implants into the tissue.

As the data shows, the case of CorNeat is just one of many significant high-tech investments across Israel in recent months and years. Early 2021 figures show that in just one quarter, investment has outperformed the entire years of 2015, 2016 and 2017 respectively – while the volume of deals in late 2020 and early 2021 represent unprecedented highs, too.

These levels of investor interest in Israeli startups has come at an excellent time for the biotech sector, which was identified as ripe for innovation in the wake of the Covid-19 pandemic.

“The pandemic has brought to light long-standing inefficiencies in biopharmaceutical operating paradigms, signalling the start of a long-overdue reform”, said Maxim Manturov, head of investment research at Freedom Finance Europe regarding the growth of the biotech industry.

“Accelerated digitalization of biopharmaceutical research and development can help democratize clinical trials by allowing people of different ages, races, and socioeconomic backgrounds to participate. Drug development can be sped up through more representative recruitment, which leads to a faster time-to-market for pharmaceuticals.”

As an ever-prominent tech hub, it’s clear that Israel is already making waves in the world of biotech, but we may see this industry growth as an opportunity for innovative cities away from the startup melting pot of Tel-Aviv to take to the fore – with Jerusalem, in particular, looking to ramp up its bid to become a high tech capital.

Jerusalem and Haifa’s Bid to Compete with Tel-Aviv

Tel-Aviv’s proficiency at producing unicorns is well known globally. In recent months, the tech hub has ranked among the world’s most prolific geographical locations for startups that have attained valuations of over $1 billion.

However, the tech capital of the startup nation may soon face some domestic competition, as Jerusalem ramps up its bid to become Israel’s leading city for innovation in the coming years – and it’s set its sights firmly on the biotech sector as a means of achieving this goal.

Israel’s transport and finance ministries, along with the Israel Land Authority and the Jerusalem Municipality have all joined forces to create the Jerusalem Gateway project, which is an initiative that’s focused on countering the city’s negative migration problem by leveraging a prosperous tech ecosystem.

The project is being constructed in many phases, and by 2026, the groundwork of some of the towers is earmarked for completion – however, the project is estimated to take until 2029 for the city’s grand vision to become a fully-fledged reality.

“The entire project includes 13.5 million square feet of new construction, around 20 towers of up to 40 floors, and we expect that it will generate 60,000 new job openings,” project manager Dror Laufer told The Media Line. “The goal is to bring in as much high-tech and biotech to the area as possible.”

Innovations in the field of biotechnology are taking place all around the country, and Haifa was the host city to Israel’s most recent biotech success.

MeMed, a Haifa biotech startup backed by Li Ka-Shing’s Hong Kong-based Horizons Ventures, said on Monday that it had gained US Food and Drug Administration (FDA) approval for a clinical test that can help health care providers to distinguish between bacterial and viral infections.

The test, which will be the first of its kind, works to decode the immune response within 15 minutes to accurately learn the type of infection individuals are experiencing and has been cleared for use for adults and children alike. Prior to this, bacterial and viral infections had been difficult to distinguish even for professionals – leading to overprescription of antibiotics that were ineffective against illnesses caused by a virus.

The biotech landscape is expected to continue to thrive as we move away from the era of the Covid-19 pandemic, with the industry having been exposed as ripe for digital transformation. Now, it seems clear that across Israel, firms are helping to pave the way for new innovations across the industry – helping to pave the way for a healthier future for all.